Cryptocurrency stocks like MicroStrategy (NASDAQ:MSTR), Coinbase Global (NASDAQ:COIN), and Riot Blockchain (NASDAQ:RIOT) all pulled back during the past week. As of the market close on Thursday, these stocks were down 14%, 12%, and 14%, respectively, for the week. By comparison, the S&P 500 was flat during this time. The price of Bitcoin (CRYPTO:BTC) was also flat, whereas Ethereum (CRYPTO:ETH) was only down 6%.

As these numbers suggest, investors seem to be selling these specific stocks more than stocks or cryptocurrencies, in general. It may be impossible to know the exact reason for this, but there are a couple of things in the cryptocurrency world that might shed some light on what’s going on.

MicroStrategy, Coinbase, and Riot Blockchain are all tied to cryptocurrency in different ways. MicroStrategy has raised funds via convertible note offerings and used cash flow from its technology business to buy and hold Bitcoins. It had 105,085 Bitcoins at an average price of $26,080 as of June 21.

By contrast, Coinbase allows users to buy and sell various tokens, taking a transaction fee to generate most of its revenue. Finally, Riot Blockchain mines Bitcoin directly and currently chooses to hold the coins it mines.

These companies may differ drastically in their strategies to profit from Bitcoin, but they do share something in common — none of them had company-specific news during the past week to explain why their stocks are down. Rather, we have to look at a couple of cryptocurrency-sector concerns to potentially explain what’s going on with these stocks.

If this data from June becomes an enduring trend, it would be bad for Coinbase’s transactional revenue. For perspective, 91% of the company’s first-quarter revenue was generated from retail investors transacting on the platform.

Second, there’s been increasing concerns over regulatory risk for cryptocurrencies during the past week. For example, prominent U.S. Senator Elizabeth Warren posted a statement last week saying, “Lack of common-sense regulations has left ordinary investors at the mercy of manipulators and fraudsters.”

As it turns out, Senator Warren has a surprising ally here: Jackson Palmer, the founder of Dogecoin (CRYPTO:DOGE). On Wednesday, Palmer took to social media saying, “Cryptocurrency is like taking the worst parts of today’s capitalist system (eg. corruption, fraud, inequality) and using software to technically limit the use of interventions (eg. audits, regulation, taxation) which serve as protections or safety nets for the average person.”

Perhaps cries for more regulation from senators and cryptocurrency founders alike has retail investors rethinking whether stocks like MicroStrategy and Riot Blockchain are good long-term holds. After all, both are counting on the price of Bitcoin to go up significantly from here.

But Bitcoin might not appreciate as much as they hope, depending on what regulation looks like. That would make these stocks as risky as the cryptocurrencies themselves and explain why they were down so much this past week. 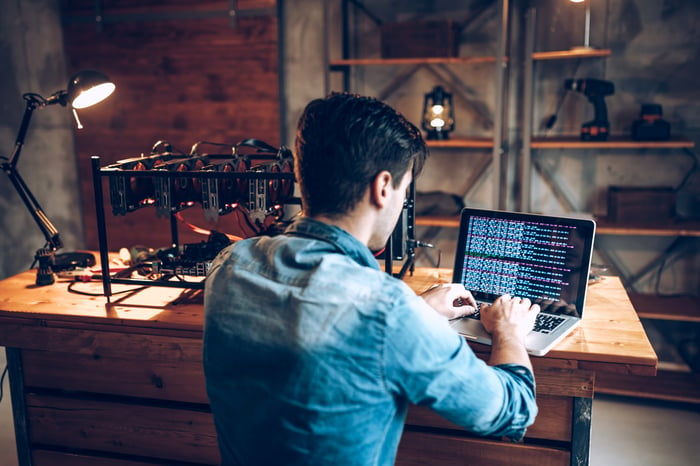 There are some sectors of the stock market that just have more uncertainties than others — cryptocurrency is one of those sectors. Keep in mind that this industry is still relatively young and, to echo Senator Warren, governments don’t really know what to do with the space.

Of these three stocks, one to keep an eye on, in my opinion, is Coinbase. If the price of Bitcoin falls sharply, it would hurt both MicroStrategy and Riot Blockchain. And since these businesses revolve around Bitcoin, it doesn’t give them too much optionality, making them more fragile under this pressure.

Of the three, I would say Coinbase has the most potential for optionality because it has 56 million registered users and over $223 billion in assets on the platform. I’m not saying that makes a Coinbase investment less risky. I’m saying that I see optionality potential — it has a chance to expand outside its potentially vulnerable core product offering and expand into something that might be more stable.

Right now, Coinbase is finding ways to monetize its base by letting them earn rewards for the crypto they hold. But perhaps this optionality can even be expanded outside of cryptocurrency in time. It’s not a sure thing, but rather something to watch in coming quarters.

This article represents the opinion of the writer, who may disagree with the “official” recommendation position of a Motley Fool premium advisory service. We’re motley! Questioning an investing thesis — even one of our own — helps us all think critically about investing and make decisions that help us become smarter, happier, and richer.