Older cryptocurrencies including Bitcoin Cash (BCH), Litecoin (LTC), and VeChain (VET) amongst others are redefining the bullish surge as the Dogecoin (DOGE) fever cools off. Dogecoin has arguably taken the center stage in the past days as retail investors doubled down on their efforts to push the meme coin’s price to $1. As the bullish buyup mounts, the coin made a runup to become the 6th largest cryptocurrency by market cap fueling the altcoin market breach of the $1 trillion valuation cap. At the time of writing, Dogecoin has retraced from its ATH at $0.4377 and is currently exchanging hands at $0.2997 at a $38.34 billion market cap.

Today, the baton has been passed down to BCH, LTC, and VET with impressive daily gains that have duly complemented their overall weekly performance.

Bitcoin Cash has fallen off the cliff as more DeFi-focused altcoins permeate the cryptospace. Once amongst the league of crypto elites, the cryptocurrency which is a result of a Bitcoin hard fork has dropped out of the top ten cryptocurrencies, a position it is now gradually reclaiming with its current bullish outlook.

BCH is exchanging hands at $1,146.92, up 24.57% in the past 24 hours atop a 75.53% weekly gain according to CoinMarketCap. The BCH-USD 4-hour chart on TradingView is also bullish and though there are signs of an impending price reversal, the short-term Moving Average is indicative of a broader to medium-term run in price.

Litecoin has relatively maintained its gait amidst the ongoing bull run, and with its current price of $325.83 at 43.18% weekly gain, it is set to breach its all-time high of $375.29 also set in the December 2017 bull cycle. 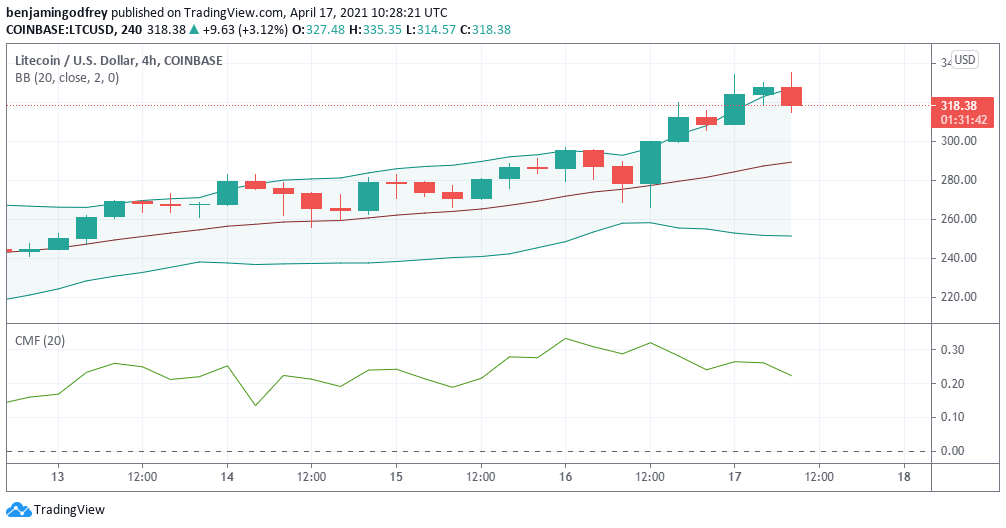 As seen in the LTC-USD chart above, the cryptocurrency has breached three key resistance levels at $280, $300, and $320 respectively. While a healthy retracement is to be anticipated, a breach above the $340 resistance level through continuous buying action could finally push the coin’s price above the $375 level.

VeChain is also an outperforming altcoin after surging to a new ATH today, and currently trading at $0.2353, up 35.30% in the past 24 hours and by over 72% in the trailing 7-day period. As the altcoin market journeys toward more maturity, VET will be looking to retest new highs above the record $0.2782 it established earlier today.

As shown in the VET-USD chart below, the potentials for a new price discovery are high seeing the great run in price since April 12th to date. However, before this new price discovery is made, a correction may be seen in the short term as the Awesome Oscillator and MACD are proof that the coin is currently in the overbought region. 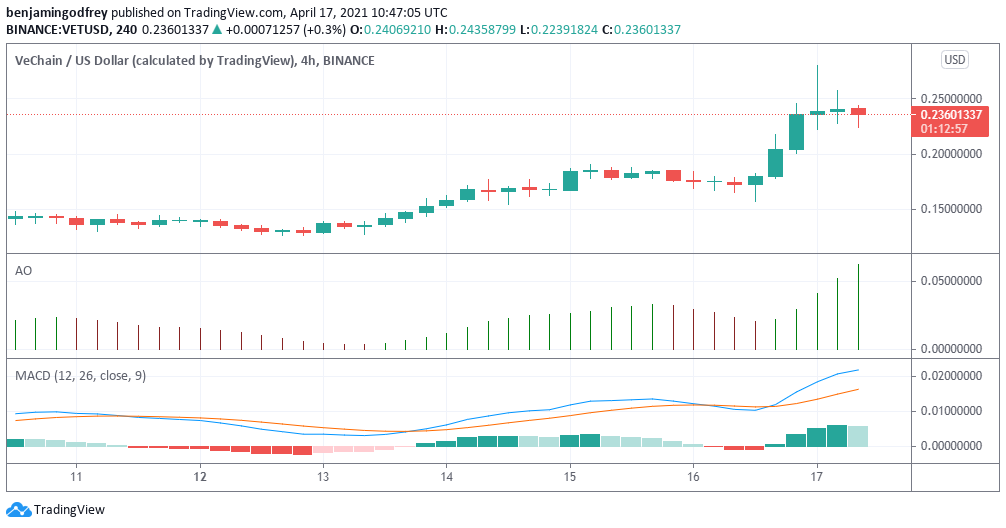