Money in the Information Age

Money used to be somewhat of an artifact. “Capital” was a word used to describe it. You knew what it was because it had weight and it had to be kept in a vault, or at least it made noise in your pocket. But a funny thing has been happening over the last few decades. Money became a claim on real assets, and then just a number on a computer screen. It became weightless.

A little icon showed up in your Gmail inbox and all of a sudden you can email money? Apps like Venmo and PayPal (PYPL) let us send each other money through the ether. Money started to look more like computer code than a coin, or a piece of paper.

All this digitization sped up the velocity of money, and the net effect was a dramatic increase in economic activity. But there were problems too. For example, US dollars are strictly regulated in the United States. But what happens to dollars once they leave the US? Now it’s a whole different ballgame. Regulation has become as perilous as it is tenuous with visibility into these “dark pools” of eurodollars best described as guesswork (and that’s being generous).

Jeffrey Snider from Alhambra Investments has done a better job than anyone at explaining what the Federal Reserve actually does and doesn’t do. If you want to go down the rabbit hole, I suggest watching his incredible video series on YouTube.

Long story short, when we increase the supply of dollars, they get sucked into the global economy just as fast as the Fed can add zeroes to their balance sheet. This is the primary reason why this new liquidity that’s been created has not resulted in CPI inflation (we’ll set aside asset price inflation for now).

So what’s the prescription? It’s actually to print more dollars to vanquish the global dollar shortage. But then what? Well, at some point, there will be enough dollars in the eurodollar system, and we’ll have to stop all the printing. And that’s where the problem lies.

In the United States we live in today, it’s become impossible for either political party to “allow” the market to crash. Just look at how Trump has reversed his stance since taking office. And remember, Trump IS the republican party.

Would you expect anything less from the other side of the aisle? Look at the rise of Andrew Yang and the surge in popularity of Bernie Sanders.

Think about it. An elected official today has the choice of dealing with a big problem now before it gets worse (take the budget deficit for example), or simply kicking the can. What do you think they’re going to pick?

Neither party wants to be held responsible for pulling away the punch bowl. And so we print like we’ve never printed before.

Part of this whole loosey-goosey monetary policy regime includes super-low interest rates to push people out of the bond market and encourage risky behavior like taking on mountains of debt. And it’s been this way for forty years.

Response from Pension Funds and Corporations

Consider the implication for pension funds which are currently underwater by at least $1.24 trillion (and that’s just the states). Bonds were an important part of their strategy for meeting their obligations but now they’re being forced out on the risk curve. 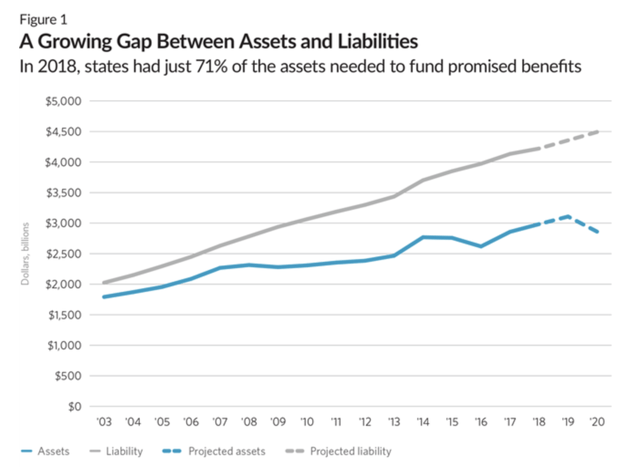 So what are pension funds (and endowments) doing? Well, some of them are getting exposure to Bitcoin (BTC-USD) through firms like Morgan Creek.

Pension funds aren’t the only ones pondering how to allocate capital in this turbulent age of low yielding debt. Michael Saylor from MicroStrategy (MSTR) announced that they had moved $425m of his company’s cash into Bitcoin.

Saylor explains that sitting on millions of cash was tantamount to “sitting on a melting block of ice.” And then there’s this:

What he’s talking about is the energy required to produce Bitcoin and the fact that Bitcoin’s primary role is acting as a store of value. If you need any more evidence, just look at the recent spike in correlation between Bitcoin and gold (GLD). The narrative matters, and it’s picking up steam. 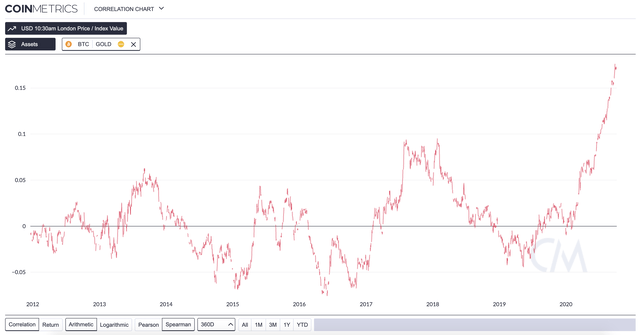 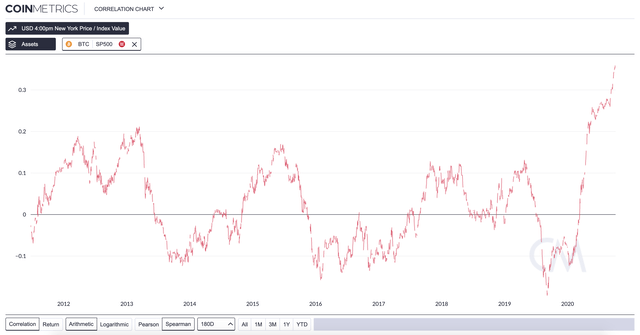 These charts should make you pause, if nothing else. It seems likely to me that the floodgates are starting to crack. I think Wall Street is knocking on Bitcoin’s door. In fact, I know that’s the case.

I find it particularly interesting that liquidity in the crypto space has been going vertical this year. Let’s look at the total value of stablecoins (or cryptodollars if you will). It’s up by 3x to $20b just this year. 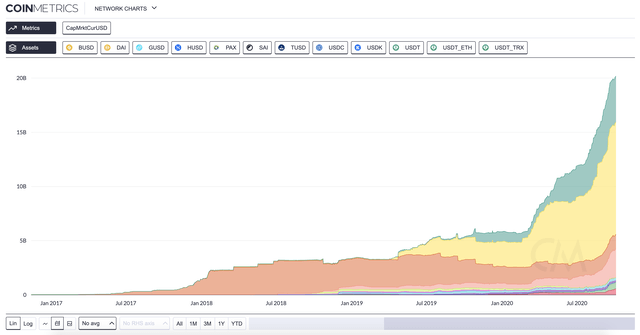 Additionally, Bitcoin locked up or “wrapped” for use on other blockchains such as Ethereum (ETH-USD) is skyrocketing. This Bitcoin is being used to stabilize and collateralize smart contracts BTW. 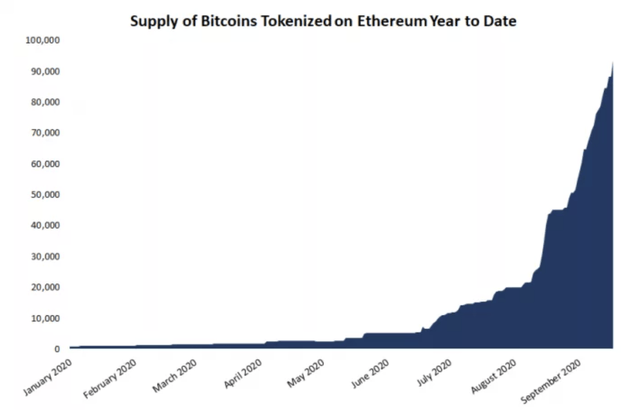 One can’t help but wonder how much of this was driven by the fed’s recent action, but I digress.

On the regulatory front, we should probably start with the SEC. Hester Peirce, the SEC commissioner affectionately named “Crypto Mom” was recently confirmed through 2025. And Jay Clayton recently said he was “willing to try” a tokenized ETF. This is kind of a big deal.

Then last month cryptocurrency exchange Kraken made inroads with the banking world when they became the first crypto exchange to obtain a banking charter from the state of Wyoming.

More recently, however, all eyes were on Bitmex when the DOJ charged them with violation of the Bank Secrecy Act. 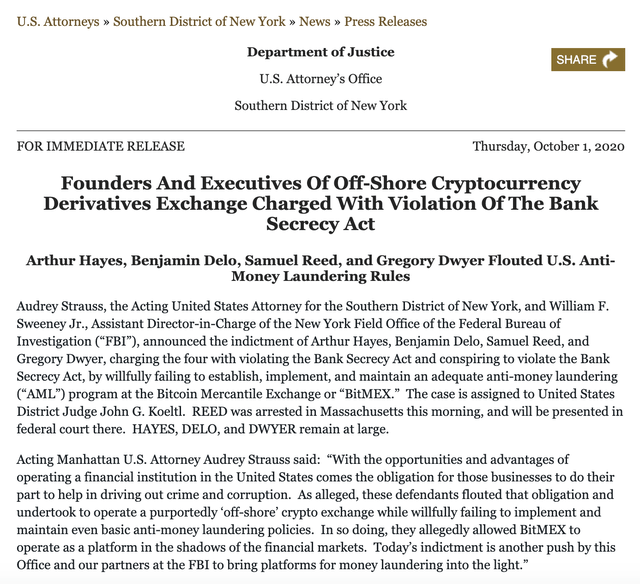 One might think this would be scary news for people in the Bitcoin/Crypto space, but instead it was met with a mere shrug. In fact, a much more interesting angle was the one that Travis Kling from Ikigai Asset Management brought up.

I tend to agree with Kling, and not just because he’s my boss!

The financial crisis of 2008 set the stage for Bitcoin which began operation in January of 2009. The point then is the same as it is now. We know that we can’t trust the federal government to maintain the purchasing power of the dollar. 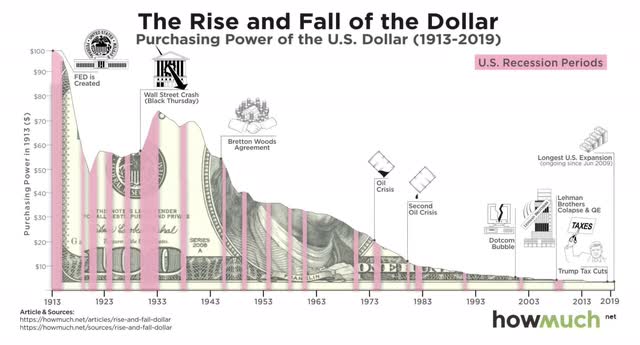 But to be clear, this is entirely their fault. After all, we seem to lack the political will to balance our budget. And remember that the USA is also being squeezed by Triffin’s Dilemma. That is to say that due to the fact that most transactions and debt in the world are denominated in dollars, we’re literally forced to export dollars to the global economy and run a trade deficit. If we don’t, we’ll suffocate the global economy! Scroll up and watch some Jeffery Snider videos for more details on how this is playing out. 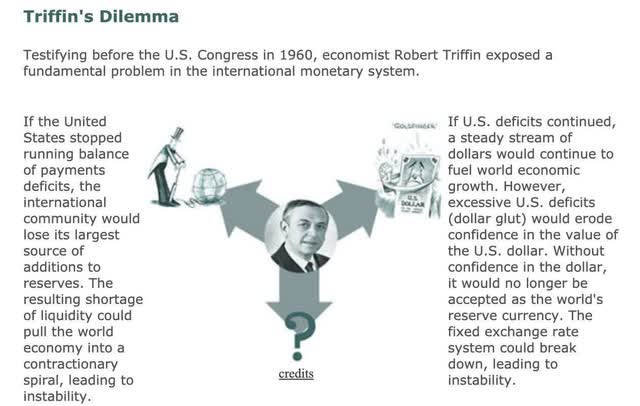 Now, if you simply zoom out and look at Bitcoin again, you might see something that grabs you. 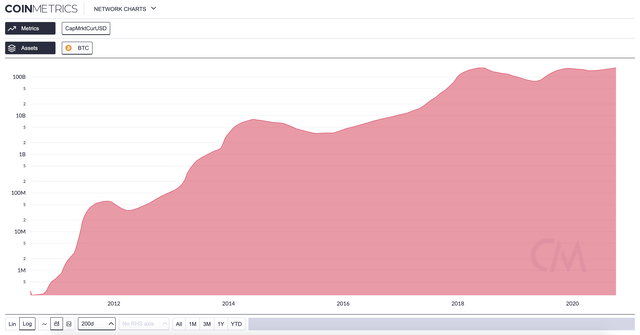 The chart above is displaying the 200-day moving average of the Bitcoin market cap. Notice that the floor is slowly being raised?

Another way of looking at this is that Bitcoin has now spent more days above $10k than it ever has before.

Taken as a whole, it’s really impossible to ignore Bitcoin anymore. If you put together all the pieces, you’ll see that it just makes sense.

There is a certain size that Bitcoin needs to get to, and I don’t know exactly what it is. But when it happens, you’re going to see money just start pouring in. The reason is simple, the investible landscape of a mega-fund only includes assets with enough liquidity for them to enter and exit without major slippage. Bitcoin is inching closer and closer to that tipping point day by day.

Disclosure: I am/we are long BTC-USD, ETH-USD. I wrote this article myself, and it expresses my own opinions. I am not receiving compensation for it (other than from Seeking Alpha). I have no business relationship with any company whose stock is mentioned in this article.